Prayers of the Ancient Ones | Guna Foundation 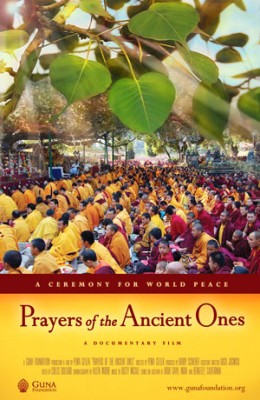 Prayers of the Ancient Ones takes us on a journey to Bodh Gaya, India, the holiest site of Buddhism where the Buddha attained supreme enlightenment under the Bodhi tree. Each year, over 10,000 Tibetan monks, nuns and lay pilgrims travel here from all across the Himalayan region to pray for world peace and affirm their heritage in the face of overwhelming challenge and loss.

The film chronicles the story of the World Peace Ceremony founded by Tarthang Tulku Rinpoche in 1989, an annual event that has united the Tibetan Nyingma community, the most ancient of the four schools of Tibetan Buddhism. Here at the ceremony, Tarthang Tulku has led one of the world’s largest efforts to preserve the Tibetan culture through his monumental offerings of Tibetan sacred texts and art. And through their unceasing prayers for peace at the very source of their spiritual tradition, the Tibetans have helped revitalize a long dormant place of worship and reinvigorated their culture in the most critical time of their history.

This is the story of a sacred place, an exiled people and a Tibetan lama’s immense efforts to restore Tibetan culture. Prayers of the Ancient Ones is a majestic testament to the beauty and power of working from one’s highest aspirations for the benefit of all beings.

“‘Prayers of the Ancient Ones’ is a story in and of peace. “

“. . . moving and beautiful — the story of many communities empowered to give. It effectively charts a path to peace through cinematography, through an abundance of visual perspectives alive with dynamism, but deeply quiet. The message is of inner transformation through knowledge.”

– Huffington Post Review “Towards an Architecture of Peace,” Nov. 2013

“… a gorgeous and redeeming film …”

“The most stunning images are aerial views captured by cameras on long jibs, but the most memorable are the facial expressions of the monks and nuns as they are gifted with armfuls of sacred texts.”